The Gritty Reality of Solar Power

Tweet
By:
Priti Gulati Cox and Stan Cox
Topic:
Less of What We Don't Need

Time is fast running out. The world’s affluent nations, with their abundant greenhouse emissions, have to finally drag themselves across the starting line and begin phasing out fossil fuels at the accelerated pace that the climate emergency demands. And if they can manage to do that, they clearly will need to quickly build up wind and solar electric capacity to partially compensate for the shrinkage of oil, gas, and coal supplies while addressing the prospect of energy shortages by securing production of essential goods and services for everyone.

Unfortunately, mainstream climate visions have strayed far from confronting the existential necessity to banish fossil fuels. They simply assume that the buildup of renewable energy will automatically chase fossil fuels out of our lives and fully replace them, watt for watt and Btu for Btu. These visions hold out the promise of a world in which a pristine, Sun-powered economy fulfills any and all of our material desires far into the future—a delicious, guilt-free cornucopia. But the green-growth promise is a mirage, and the realities of a high-production, wind- and solar-powered world will be much less tasty.

Any industrial installation, including solar and wind farms, profoundly disrupts the landscape on which it sits. If it were possible to fully satisfy the bloated energy appetites of affluent nation by covering hundreds of millions or billions of acres of the Earth’s surface with power-harvesting hardware, the result would be irreparable ecological damage.

The global rush to mine these metallic ores is on, and the dire ecological and humanitarian consequences that always follow have spurred growing concern. But the mining and processing of a much more mundane, often overlooked mineral resource—sand—is also critical to renewable-energy expansion and terrible for the Earth and its human and non-human inhabitants.

The solar-energy industry, like digital electronics, is built on a foundation of silicon. Number 14 in the periodic table of the elements, silicon is abundant in the Earth’s crust. But the industries that mine and process sand, quartzite rock, and other sources of silicon dioxide to obtain pure silicon for use in solar equipment belie the popular, sunny green conception of an alternative-energy economy.

Manufacturing a solar panel’s photovoltaic cells requires very high-quality silicon. Before the rapid growth in solar panel production took off, manufacturers could satisfy their need for the element by recycling flawed computer chips cast off by computer makers. As the solar industry’s demand for silicon exploded, however, they had to start producing their own supplies, by extracting pure silicon from sand and other minerals.

Sand headed for solar uses must go through energy-intensive, and often toxic, processing. It begins with heating sand or quartzite rock, along with a carbon source like wood chips or charcoal, to 3,500 degrees F, resulting in a chemical reaction that produces metallurgical grade silicon. Both the energy for heating and the combustion of the carbon sources contribute to greenhouse warming. Producing one pound of this form of silicon generates an estimate pound and a half of carbon dioxide emissions.

Further refining the metallurgical grade silicon, in order to achieve the 99.9999% purity required in photovoltaic wafers, requires additional heating and chemical treatment. That process produces four tons of the highly toxic compound silicon tetrachloride for every ton of the desired product, polysilicon. And the ultrathin wafers that are sliced from polysilicon blocks for use in photovoltaic cells must be cleaned and smoothed, typically with extremely dangerous hydrofluoric acid.

Sand’s central role in solar energy and its ecological impacts doesn’t end there. The glass sheet that covers and protects a solar panel must have higher transparency than ordinary window glass, to maximize light capture. That requires starting with sand that carries minimal impurities. Most desirable is sand mined from river beds—causing severe disruption of local and downstream ecosystems. Then even the highest quality sand must be deep-cleaned, which involves further energy- and chemical- intensive industrial techniques.

And there’s more to solar energy’s footprint than silicon—for example, the panels’ requirements for large quantities of pure silver and the exploding demand for aluminum frames and supports. In sum, the broad ecological impacts of manufacturing, installing, operating, and, finally dismantling and disposing of a solar installation at the end of its life span include global warming potential (mostly from the silicon processing), ozone depletion, eutrophication of water bodies, and toxicity to humans and non-humans. The lifetime energy consumed is equivalent to a year and a half to three years of the solar farm’s energy output. And photovoltaic panels last only 25 years on average. Their power output declines year by year, and then they have to be replaced—and the cycle of ecological damage begins again.

The chief reason for recent, much-touted decreases in the cost of solar-generated electricity is the increasing share of solar component manufacturing being performed in China, with its low-wage labor force and cheap coal-fired power supply. A whopping 80% of the world’s solar-grade polysilicon is produced in China, with 45% in the northwestern province of Xinjiang alone.

Recent news reports show how China’s solar-energy industry is having dire consequences not only for the environment but also for human rights and well-being. In Xinjiang, members of the persecuted Uyghur ethnic minority make up most of the labor force in the hazardous quartz mining and polysilicon manufacturing industries. And most of the Uyghurs are employed through the government’s so-called “surplus labor” and “labor transfer” programs.

A 2021 investigative report from Sheffield Hallam University in the UK concluded, based on strong evidence, that these initiatives “are deployed in the Uyghur Region within an environment of unprecedented coercion, undergirded by the constant threat of re-education and internment” and are “tantamount to forcible transfer of populations and enslavement.” The researchers found that the supply chains of at least ninety solar energy companies worldwide included polysilicon produced by this forced-labor system.

We must be pragmatic, of course. If the world is going to start leaving oil, gas, and coal in the ground forever, an expansion of wind and solar energy capacity will indeed be necessary. (Some industry insiders turn to a reliable if rusty old saw in advising us that to make a “renewable omelet”, you have to break—and “melt”—some ecological eggs.)

New energy development, however, must be pursued judiciously, minimizing ecological impacts and aiming for a much more modest energy capacity and less industrial production than we have today. Affluent societies worldwide will need to adapt to life with a much smaller and much more equitably shared energy supply; otherwise, we will keep extending our plunder of the Earth, jogging along on the same old ecologically destructive industrial treadmill.

On September 7, we will consider the difficult problem above as well as the much broader reasons why in dealing with the global ecological emergency, we must not aim to replicate today’s high-energy, fast-growth society, changing only the sources of energy. We will also consider two sourdough cinnamon-swirl loaves. They are very similar and both look yummy, but only one is edible. Both include the ingredients typically used in this type of bread. And, yes, both recipes, in accord with physical and biological reality, require that eggs be broken before being added to the dough. But while one of the loaves is—like the mainstream renewable-energy utopia—tasty and satisfying, the other is more realistic: its sweet center “swirl” contains a big dose of sand, rendering the loaf as absurd and indigestible as the cornucopian dream of unlimited “clean” energy.

From the field and kitchen of discomfort food 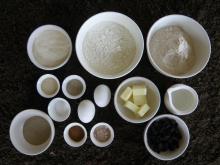 Use the above ingredients, but substitute sugar for sand in the dough and filling.)

Combine the dough ingredients and knead (adding a little flour if needed) to form a smooth doughball. Place the doughball in a lightly greased container and let it rise, covered, for 1½ to 2 hours till doubled. Meanwhile, make the filling by mixing the sand with the cinnamon and sorghum flour. Lightly grease a 9” x 5” loaf pan and set aside. Transfer the risen doughball to a lightly greased surface and roll into a 6” x 20” rectangle. Leaving about a 1” bare strip on one of the 6” edges, brush the remaining 19” of the dough with the beaten egg and sprinkle it evenly with the filling and raisins. Starting with the 6” edge that has the filling, roll the dough into a log till you reach the bare strip and pinch it closed. Pinch-close the two ends as well. With the seam side facing down, transfer the log to the loaf pan and let it rise, covered, for about an hour.

Preheat oven to 350° F (or 3500° for the “Gritty-Swirl” version, if you want to try making polysilicon), and bake for 45 minutes. To avoid over-browning the top, you could place a piece of foil on top of the loaf after the first 20 minutes of baking.