Tweet
By:
Stan Cox
Topic:
Less of What We Don't Need

The more convenient and efficient autonomous electric cars turn out to be, the worse their impact on greenhouse emissions

The automakers and IT giants are predicting that autonomous vehicles (AVs or “driverless cars”) will play a big role in reducing America’s currently extravagant emissions of greenhouse gases. In this claim (as in the assertion that flying cars will be more energy efficient than helicopters), climate mitigation is serving not as a goal but as a selling point for a lucrative new technology that society doesn’t need.

Most of the academic discussion of autonomous vehicles assumes the gradual introduction of both personal and shared electric AVs into the market. During that lengthy transition, AVs presumably will ply the streets and highways alongside human-driven electric and internal-combustion vehicles. How this is going to take us toward deep reductions in greenhouse emissions is not clear; the expectation appears to be that market forces and government incentives will somehow push the system toward fully autonomous, electrified transportation powered exclusively by renewable sources.

But the 100-percent renewable dream is a mirage, and AV cars will not bring it to life. That’s not due to any shortcomings of AVs; on the contrary, the technology’s failure to resolve the climate problem will be a result of the many attractive features that a successful AV-based system would offer—all of which will have the effect of increasing greenhouse emissions.

In a commentary on autonomous vehicles, Shelie Miller and Brent Heard of the University of Michigan wrote, “From an environmental point of view, the intrinsic technical attributes of AVs appear to be largely favorable.” However, they continued, it is “human behavior” patterns that may have the greater influence, and that influence will be more negative.

The logic is simple: a better riding experience will encourage more riding. According to AV developers, the new vehicles will elevate the experience by offering more efficient operation and lower operating expense; improving safety; reducing driver stress and fewer road-rage incidents; freeing up hands, eyes, and attention for more useful tasks or more pleasant activities; reducing traffic congestion; putting an end to parking hassles; and offering greater mobility for young people, the elderly, and the disabled.

All of those benefits are already provided by public transportation. But most Americans’ goal is to be able to travel seamlessly door to door, and to do so without having to share space with  people they don’t know. Those desires, often sharpened by class bias, are a chief reason that so many elect to stay off the train, bus, or subway and endure the hassles of driving.

For those who can afford them, personal AVs will eliminate both the inconvenience of public transit and the hassles of driving, creating a system that appears at first glance to be the best of both worlds. As a result, incentives to travel even more miles per day will be intense. (Conversely, if Murphy’s Law remains in force and AVs don’t manage to deliver many of the promised personal benefits, miles traveled will not increase as much.)

Until AVs go into large-scale production, all projections of how America’s transportation systems will evolve are highly speculative. Nevertheless, a number of studies have attempted to model that evolution, their assumptions being based on what we know about how humans use transportation today.

The models show that under most scenarios, personal AVs will tend to increase the total vehicle miles traveled. When commuting time becomes less of a burden, people will be less inclined to live close to their workplaces. Suburban sprawl and attendant commuting distances are expected to increase. Parents will be able to send children off to school in their own car instead of having to drive a carpool or ask the kids to walk or ride the school bus. Commuters arriving at work be able to send their vehicles, empty, back out to the suburbs for cheaper or free parking, or to be plugged in. Cars could even be sent on solo errands, whether necessary or frivolous—maybe even to pick up a lunch box forgotten in one’s morning rush out the door.

Personal AVs would also make long-distance travel more appealing. One article speculates about “the use of AVs as mobile dwellings or luxury overnight sleeping compartments in lieu of higher density long-distance modes of travel.” In an AV world, use of all types of non-car public transportation is certain to decrease, and some fear that with reduced ridership, transit systems will go into a downward spiral—a disaster for those who can’t afford to buy or operate personal vehicles or ride-sharing services. Whether it’s in big cities or in regions with widely dispersed, smaller cities and limited public transportation (think Iowa or central Pennsylvania), per capita annual miles traveled will increase significantly once AVs are widely adopted.

(The argument has been made that an increase in travel miles won’t matter if cars are powered by renewable electricity. But it will matter very much. Through much of the coming decades-long struggle to eliminate all fossil-fueled power generation, large portions of the national power supply will remain dirty. Meanwhile, every additional kilowatt-hour of wind or solar generation that goes to power a growing fleet of electric vehicles will be unavailable for traditional uses of electricity like lighting homes, refrigerating food, and reading online articles about self-driving cars. That will push even farther into the future the day when fossil-fueled electricity is eliminated. If we want that happy day to come, we will have to structure society in ways that will consume much less electricity, not more.)

So what kinds of numbers should we anticipate? The transportation engineering firm Fehr & Peers has projected that with near-complete conversion to AVs, localities without good public transportation would see increases of 10 to 35 percent in total vehicle miles traveled, depending on type of street or highway. Even in areas served by public transit systems, miles traveled would increase by up to 20 percent.

OECD’s International Transport Forum estimated that an autonomous vehicle-share (not ride-share) system would increase miles traveled by 89 percent, primarily because cars would often be driving empty from one customer’s drop-off point to another’s pick-up point. 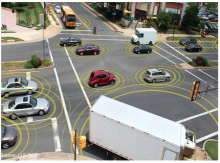 With personal vehicles remaining in use, concurrent use of AVs in full ride-sharing mode would not necessarily alleviate those problems. In surveying the use of existing conventional ride-sharing services, the UC Davis Institute for Transportation Studies wrote, “We find that 49% to 61% of ride-hailing trips would have not been made at all, or by walking, biking, or [public] transit,” and that “ride-hailing is currently likely to contribute to growth in vehicle miles traveled in the major cities represented in this study.”

A University of Texas study concluded that replacing personal vehicles with shared AVs would reduce the total number of automobiles by 90 percent but would increase total vehicle miles driven by 10 percent. In densely populated areas, more advanced automatic coordination of fleet movements could improve that number, but it would not deeply reduce travel miles.

Autonomous electric vehicles might be able to help reduce cities’ greenhouse emissions and improve quality of life for all, but only when

– total energy consumption has been reduced to the point that renewable electricity generation capacity is sufficient to supply all demand, including the increased consumption that results from electrifying transportation

– personal vehicles are barred, all passenger cars are for ride-sharing only, and travel miles per person decline.

– population density is high enough and the dispatch system sophisticated enough to virtually eliminate miles traveled at low occupancy, and

– well-functioning buses, rail, and other public transportation modes are given top priority

I have seen no scenarios that envision a system like that being rolled out and completely replacing private cars and internal combustion engines on an accelerated schedule. It could be done, though, by creating affordable-to-all fleets of autonomous electric ride-share vehicles—especially vans, and buses—along with systems for maximizing the occupancy rate of every vehicle; maintenance and improvement of existing rail systems; and a strict and annually declining ceiling on the number of personal vehicles of all kinds. But all of those elements will have to be activated before AVs are introduced.

Don’t hold your CO2 waiting for that to happen. In today’s America the rollout of AVs will be steered not by climatic necessity but by corporations in Detroit and Silicon Valley following the scent of big profits. GM and Google are not in this game because they want to see fewer cars and SUVs sold. Once personal AVs are out there, and once Kansans start demanding autonomous pickup trucks and Ohio retirees start shelling out for AV-RVs, a Pandora’s box will have been opened, and there will be no way to slam it shut.

There is also no reason to expect the effects of wholesale AV adoption to be class-neutral or that it will eliminate the biases against disadvantaged groups that are endemic in current transportation systems. Another UC Davis ITS policy brief notes that “without an intentional focus on equity,” AVs “may exacerbate existing barriers and increase inequality.” The report urges that governments “include disadvantaged communities in transportation planning, especially regarding shared mobility.” Unless the cost, access, public health, and employment are addressed directly as justice issues, the report argues, AVs could further widen the gap between privileged and disadvantaged Americans.

The headlong rush into AV world can be resisted purely on the basis of published research, along with our knowledge of how capitalism works. But I am also fully in accord with the more philosophical yet still pragmatic arguments made by Rebecca Solnit, who wrote last year in the Guardian, “Self-driving cars are, like so much technology, a solution in search of a problem.” Her bottom line: the last thing the world needs is a new, more highly evolved species of automobile. With a climate emergency bearing down on us, I stand with Solnit.

Stan Cox is on the editorial board of Green Social Thought and co-author, with Paul Cox, of  How the World Breaks: Life in Catastrophe’s Path, From the Caribbean to Siberia.